Message Sent
Thank you for your inquiry. We will respond to you as soon as possible.

One Gift, a Lifetime Investment

Meet your personal financial goals while making a difference for our future.

You are at: Planned Giving > Gift Options > Donor Stories

A Gift for Generations 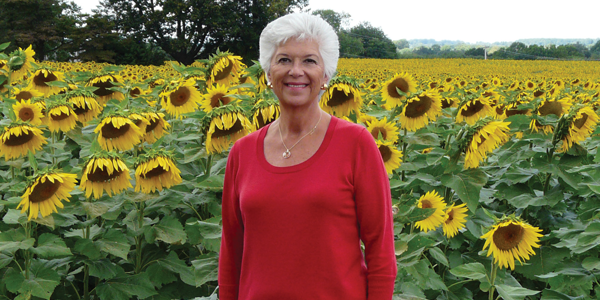 Barbara Bagley '70 describes Regis as "near and dear" to her heart, saying that it played an integral role in her life and career. That's why she is a member of the Higgins Society and the Catherine Burke Society—she gives to Regis annually and included the university in her will to ensure future generations have the same opportunities to excel.

Here, Bagley takes us back 50-plus years to her days at Regis. She shares what it was like on campus in the 1960s, how she went from a political science major to a magazine editor in New York City, and words of wisdom for current students.

Tell me about your family growing up. My parents were both the children of immigrants—all of my grandparents came into the United States through Ellis Island in 1910, three of them from Ukraine and one from Poland. My father barely finished grade school and my mother went to work in a dress factory ("sweat shop") at the age of 14 and then earned her high school diploma in night school.

I grew up in New Haven, Connecticut, and went to a Catholic girls' high school in which all the students were encouraged (if you were not going to enter the convent) to attend college—preferably a women's college, and definitely a Catholic one.

How did you end up at Regis? I visited Regis with a high school friend and her parents during my senior year. I decided that I wanted to major in political science and Regis was one of the few Catholic girls' colleges I applied to that offered that major in 1966.

My parents never even saw the campus until they moved me in for my first year. As we drove up the beautiful tree-lined drive toward College Hall, my dad commented, "Well, you really know how to pick 'em!" This from the man who thought I needed to attend only a two-year college because, after all, "You're only going to get married." Boy, did he change his mind!

So just like many of Regis' current students, you were a first-generation college student. Yes, I was the first generation in my family to attend college and I felt a responsibility to do my best. The cost was a tremendous burden to my parents, considering their very modest blue-collar incomes and they had already paid for four years of private high school for me, plus put my older brother through college. They were very proud when I graduated from Regis four years later in 1970.

What was it like at Regis from 1966 to 1970? Regis went through so many changes during my four years. As freshmen we had Saturday morning classes, 7:00 p.m. curfews, and were not allowed to wear pants on campus unless we had a trench coat on and were headed to or from the athletic field. The nuns all wore habits. By senior year we were wearing denim mini-skirts, pants, and could have guys in our dorm rooms (door open, of course) until midnight on weekends! Some of the nuns were in modified habits, some in street clothes.

These changes were a reflection of the times and changes in mindset. Discussions became much more diverse as we were exposed to not only new ideas in the classroom but also the changing world around us, especially with the Vietnam War, Kent State shooting, Bobby Kennedy's death, and other shocking, previously unheard-of happenings in the world.

Did you have any mentors at Regis? Sister Marie deSales had great faith in me and was the main reason I chose to make publishing my career—nothing to do with political science! Sister saw something in me and appointed me editor-in-chief of Mt. Regis, the 1970 yearbook. I felt a bit overwhelmed, but she guided me every step of the way.

Then after graduation you launched a career in publishing? My first job was as secretary to the editor/publisher of a trade magazine in New York City and my boss was terrific—he taught me so much, encouraged me to spread my wings, and gave me many opportunities to travel and write stories about diverse topics. I rose through the ranks there and was senior editor when I left to become editor-in-chief of another trade magazine. Following that I became the top editor of a magazine published in New Jersey, then eventually executive editor at a small publishing company in Chadds Ford, Pennsylvania.

That's an impressive career. You must be happy Sister Marie deSales appointed you the Regis yearbook editor! Absolutely. And we stayed close; I would update Sister on my progress and moves, always sending her copies of the feature stories I wrote. She was always generous with her praise, encouraging me to achieve the best I could—a true mentor. When my husband, Patrick, and I visited her she never missed saying, "The 1970 Mt. Regis was THE BEST yearbook ever produced at the college!"

And 50 years later you were ready to celebrate your Reunion and now it has been postponed! What are you looking forward to most when your class ultimately comes together for its 50th Reunion? My Regis roommate, Margot, and I had been planning for months. I was looking forward to seeing the changes in the campus, hearing about all the new offerings in a coed environment, and visiting with my classmates. The Class of 1970 produced some truly amazing women who achieved so much in many areas. I'm proud to be a part of the class.

And you joined the Catherine Burke Society by adding Regis to your will. Why did you choose to make such an impactful gift in honor of your 50th? Regis is near and dear to me and has been in my will for many years—and providing documentation to officially join the Catherine Burke Society during this milestone year was simple. There is nothing more important, in my mind, than supporting higher education so that all the potential and talent that exists in young people today can be explored and encouraged and realized to its fullest extent.

Over time, reading in Regis Today about students and alumni and about the changes and expansion at the school, it confirmed my belief that Regis is relevant and making a huge difference in so many lives—as it did for me. Regis is thriving at a time in which many smaller schools are not viable. It has great leaders who are fostering the school's growth, encouraging a diverse student population, and offering the opportunity to all to excel and find their place in this ever-changing world.

If you had to describe Regis in three words, what would they be? Nurturing, broadening, challenging, and encouraging. (Sorry, that's four!)

Do you have any words of wisdom or advice for current students or new graduates? Be true to yourself. Don't close any doors, remain open-minded, and take opinions and advice into consideration; but in the end, pursue your dreams. If there are detours along the way, see them as opportunities that will help to shape you. And always maintain your faith as a foundation for your life and in your relationships with others.

Learn more about giving opportunities through the Catherine Burke Society.

Let us help you with your gift plans